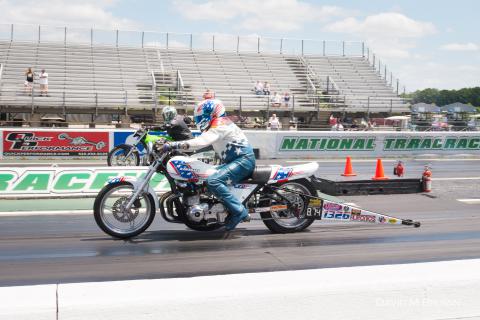 Coming into the 2022 season Mark had a new focus on preparation and fundamentals because he wanted to get back to the top of his game.  Well, it certainly worked, as Mark picked up back-to-back wins to start the JEGS ET Series season off.  Those wins put Coulson in the riders’ seat for the 2022 Championship as Mark would go on to win 2 more races and grab 2 semi-final finishes to complete his 2022 season.  One of the highlights of the season for Coulson was that he finished the 2022 JEGS ET Series season right where he started it, in the Winner’s Circle.

“This year will be one I will always remember, to win a championship and to win 4 races, racing against the caliber of racers at Trails is not for the faint of heart,” said a smiling Coulson. “This championship means so much to me and my wife Julie, we had so much going on in our lives this summer and we were still able to stay grounded and be able to compete at the highest level makes this championship that much sweeter! I want to thank my beautiful wife Julie for being there for me and supporting this crazy hobby of mine. I want to thank my great sponsors and friends Bruce Sauer with Power by Sauer, Frank Moore with AlotMoore Designs, Paint and Graphics and Bates Leathers.”

Next year Mark plans on competing for the JEGS ET Series and going for another championship.  He also hopes to compete at the NHRA Bracket Finals for a chance to win a division title.