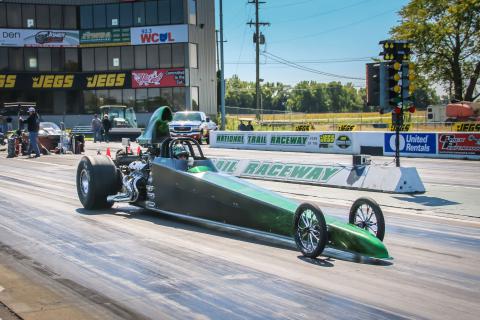 The JEGS ET Series Super Pro class is the largest and one of the most competitive classes at National Trail Raceway.  This year the class saw a championship chase come down to a classic dragster vs door car battle, with Billy Rowe, the 2018 Super Pro champion, in the dragster and Michael Underwood in the door car.  When the dust settled on the 2022 JEGS ET Series Season it was Billy Rowe taking home his second National Trail Raceway Super Pro championship.

The season started out well for Billy as he collected a semi-final finish at the second JEGS ET Series event of the year.  After that Billy did exactly what a racer needs to do to win a championship at National Trail Raceway, he started going rounds consistently week in and week out against some of the best racers in Ohio.  During the season Billy never lost 1st round and never had to visit the buyback window. On the final points race, Billy’s closest competition was Michael Underwood but on the final day of the season Underwood lost 1st round of eliminations meaning that the championship was Rowe’s.

“I never gave a serious thought about going after a second Super Pro championship, especially with our travel plans for the season.  But after the first couple of points races, the championship was clearly in sight,” said a smiling Billy Rowe. “I want to thank my wife Teri, her support is second to none.  Without my sponsors, Performance Clinic Engine Shop, Maverick Motors, Clear One Racing Products, Mickey Thompson Tires, Lucas Oil Products, Bazell Race Fuels, Streamlight Flashlights and Dewey Boggs/Matco Tools, this championship would never have happened.”