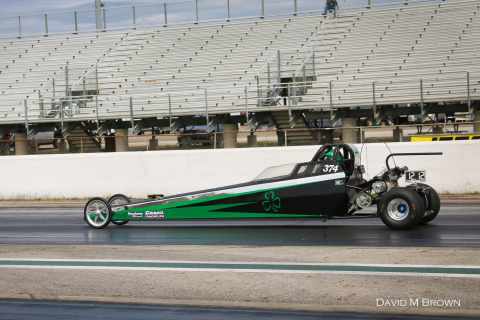 The JEGS.com Jr. Dragster Series Jr. Storm class is a class for the youngest racers at National Trail Raceway.  The class is for kids aged 6-9 years old and everyone can see the joy they have for having the opportunity to race at such a young age.  This year the points battle was between two friends, Killian Hamilton and Andrew Dutton.  Once the points were tallied it was Killian Hamilton taking home the Jr. Storm Championship.

Killian’s season started a little later than the rest of the class, as he missed the first 2 races of the JEGS.com Jr. Dragster Series.  That put Killian and his team behind in the points, but the team was able to make up some ground very quickly with a runner-up finish on June 11.  After that though Killian and his team started rolling with 1 win, 2 runner-ups, and 1 semi-final in the next 4 events.  Going into the final points weekend the championship was down to Killian and Andrew Dutton.  On Saturday, September 24th Killian was able to make it to the final round, putting him 1 point ahead of Dutton going into the final race on Sunday, September 25th.  The championship would come down to which young man would go further in eliminations.  Hamilton and Dutton faced-off in the semifinal, the winner would be the 2022 JEGS.com Jr. Dragster Series Jr. Storm Champion, it was Killian’s win light that came on giving him the championship.

“This season was so much fun being able to race with my friends. Winning the championship made me so happy because I love racing and being able to finish first was our goal,” said a very happy Killian Hamilton. “I want to say thank you to Jon Beasley, Mom (Sydney Butler), Papaw (Vic Butler), Meme (Kandy Butler) and Aunt Lyndsey Butler, they are always there supporting me and cheering me on!  I also want to say thank you to my sponsors Beasley Contracting, Graham Motorsports, Derrick Innovations and Craig's Transmissions they helped me win this championship.”

Killian plans to keep racing and try to turn on more win lights and get more winner’s circle pictures!