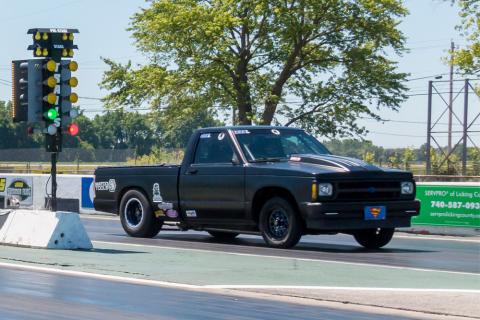 This past year the High School class, turned out to be one of the more competitive classes in JEGS ET Series.  The class is full of some of the best up and coming racers at National Trail Raceway and this year the championship came down to defending champion Hunter Wolfe and Kendylle Brown.  Once the final points were tallied, it was Hunter Wolfe successfully defending his title and capturing the 2022 JEGS ET Series High School Championship.

Hunter came into the 2022 season as the defending High School Champion and he wanted to keep that title, but with only 7 points races, the class is always tough meaning there is a very slim margin for error.  The first race of the season didn’t go Hunter’s way as he bowed out in 1st round.  But during the May 28th event, Hunter raced his way to the final round and gained some points in the championship standings.  A first-round loss on June 11th put a dent in Hunter’s championship plans but in the month of July he put together back-to-back final round appearances to take the points lead into the final race of the season.

“This year was definitely an up and down season for us. But in the end, we were able to bring home back-to-back championships,” said Hunter Wolfe. “I want to thank my Mom (Penny), Dad (Larry), Sister (Kyndal), my girlfriend (Kendylle Brown), her parents and all my friends for their support this year without them by my side and helping me I wouldn’t be where I am today.  I also want to thank my great sponsors for their support Wolfe’s Powdercoating, Duncan Performance Fuels and Matco Tools because we all know without sponsors this championship wouldn’t be possible.”

This was Hunter’s last season in High School, so he plans on moving up in classes running Pro next year with his truck.  He also plans on doing some big money races as well as he continues his search for more win lights.