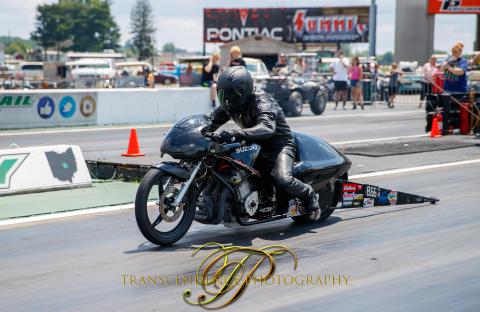 Scott and his ’05 Suzuki started the year strong as he claimed a win during the opening weekend putting him in the points lead.  After that Scott then just started racking up points as the season heated up each month of the summer.  Scott then grabbed a win at the July event where he took home the NHRA.tv Challenge Wally and extended his points lead.  After that weekend, Scott went on a small dry spell as he watched Coulson and Hill close the gap for the points.  At the final JEGS ET Series weekend, Sheppeard matched up against Mark Coulson in the second round.  It was Sheppeard getting the win and clinched the 2021 Super Pro Motorcycle Championship.

“This season has been great, with out the love and support of my wife Melinda and my son Garreth this wouldn’t be possible,” said Sheppeard, “Thank you to all my sponsors Shellhaas Family Racing, Alotmoore Custom Paint, Oink Johnson on Ebay, Dustin Lee & Hard Time Parts & Service and David Liguori Racing for all their support this season.”

This season was not only a success for Scott but for his son as well, Scott was able to watch his son Garreth win the Division 3 Super Pro Motorcycle class and book a family trip to Las Vegas.   Scott is looking forward to defending his championship next season and racing with all his friends and family.