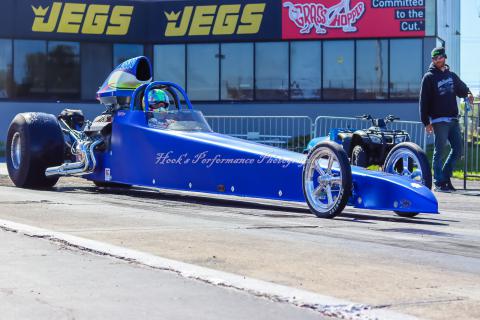 The Super Pro championship in the JEGS ET Series is always a highly contested battle between some of the best top bulb racers in Ohio.  Ove the past few seasons the points have come to the final days of the season with everyone waiting to see who comes out on top.  This year was no different, this year it came down to the dragster of Michael Needham and the door car of defending champion Scott Hessler.  At the end of the final day of JEGS ET Series, it was Michael Needham sitting at the top of the Super Pro points sheet.

Michael’s season started off decent considering he and his team made some changes to the car over the winter.  Each week the car started working better and better as the season started.  The car and driver really clicked in June when Michael picked up his first ever win at National Trail Raceway and made a move up the points.  After that win Michael continued to add points each weekend as he was trying to catch Hessler who had been leading the points since May.  Coming out of August, Michael had gained enough points to take the lead, but only by 9 points which is less than a round.

“This year has had its ups and downs, from winning my first race at Trails, to having to use three different cars to chase the points.  We had multiple motor swaps between weekends, but I would it do all over again if asked to,” said Needham. “This championship means a lot to me because of the struggles we went through to get here.  From the car troubles to just your basic life struggles that just happen during the year to be able to win a championship it makes it all worth it.  I have to thank my beautiful wife Kayla, my grandparents Rick and Linda Needham, my dad and stepmom Rick and Corrie and the rest of my family and friends because with out their support and help this wouldn’t have been possible.”

Next year Michael plans on chasing the championship and hitting some of the bigger money bracket races in the area.