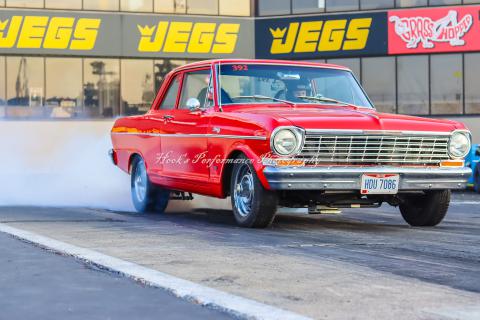 At the JEGS Wednesday Night Series events the Street class is always a fun class to watch as you get to enjoy racers compete with their street legal cars and the class is also usually one of the biggest during those Wednesday night races.  This year it was a familiar name, Michael Handschuh that was sitting at the top of the points standings at the end of the season.

The season started off in the best way possible for Michael and his ’64 Nova.  During the first event of the season, he captured the win and ran dead-on 0 in the final round to put everyone on notice that he was gunning for the championship this year.  As the season went on Michael took his Nova to the winner’s circle one more time in July to cement his spot at the top of the standings.  Handschuh capped off his championship winning season with a runner-up finish during the September event.

“This year has been very special to me, winning the championship this season helped me validate all the time and effort that I have put into the car to make it consistent and quicker.  I also proved to myself that I could put in several good races and collect more round wins than I have been able to do so in previous seasons,” said Handschuh.  “I want to say thank you to my family for supporting me this season, my dad Bob, my wife Robyn, my daughter Rosalie and my son Jameson.  I also need to thank a couple of racers that have helped me as well, Dana Thompson and Richard McMahan.”

Next year Michael plans on racing again and looks to add more winner’s plaque to his trophy cabinet.