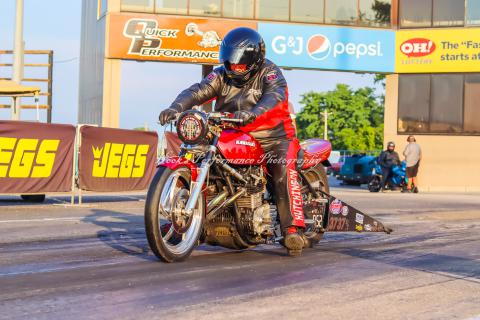 Hutchinson and his Hutchies Lawn and Home Maintenance Kawasaki entry started the year off on a very good point by picking up a victory the first race of the year in May.  Hutchinson again visited the Winner’s Circle in June when he defeated Austin Seelig in the final round.  At the 3rd race in July Hutchinson unfortunately lost in the semi-finals.  But after that he picked up 2 more wins to finish off the season and earning him the championship.

“This year we were still able to win races and a championship despite all of the carnage to the bike.  We had a lot of broken parts this year, but it feels good to take home my 15th championship,” said Marshall. “I want to thank my wife Jaymi, son Russell, my nephew Tyler and of course my Dad for all their support and help this year, without them I wouldn’t be able to do what I do.”

Next year Marshall plans on making a run at the Super Pro Motorcycle championship at the JEGS ET Series and racing at some of the motorcycle only events in the area.