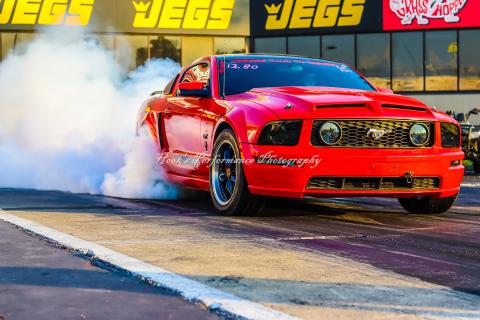 This season the Modern Muscle class saw some new faces racing and some veteran racers take home event wins.  The points championship came down to the final race of the season with June Suain and her ’06 Mustang taking home her first ever Modern Muscle track championship.

June started the season with a win on the first JEGS Wednesday Night Series event of the year.  She then followed that up with another win and runner-up later in the summer.  She was able to clinch the championship on the final race of the year as she had rookie racer, Clay Brown, right on her heels.  But her semi-final finish on the final points night was enough to secure the championship.

“I want to thank my husband Ken, he is my crew chief, my crew and my biggest supporter.  He is the one that got me into racing years ago,” said June.  “This year was a lot of fun, it took us a little while to get the car figured out as we made some changes to it prior to the start of the 2021 season but we were able to get it all figured out.”

Next year June is looking forward to competing more on Saturdays at the JEGS ET Series events.