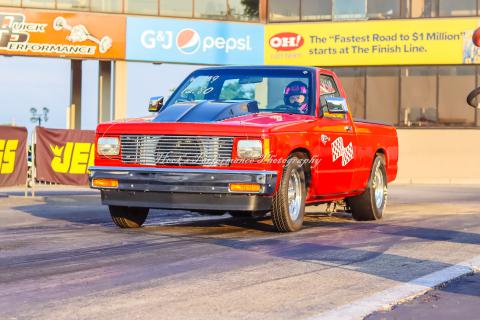 The Lion’s Den Speed Angels class this season was a hotly contested battle between Karla Eveland and Mariah Strausbaugh.  These ladies competed at each of the JEGS Wednesday Night Series event during the summer chasing down the coveted track championship.  Once the points were tallied up, it was Karla Eveland bring home the championship.

Karla and her ’89 S-10 started the season off strong as she grabbed the win at the very first Lion’s Den Speed Angels race of the year in May.  At the second race in June, Karla was once again in the final round but was only able to grab the runner-up place.  At the event in July, Karla went to the semi-finals but saw her competition, Mariah Strausbaugh, close the gap at the top.

At the next event in August Karla was beaten 1st round and had to watch as Mariah won that night and created a tie at the top of the points standings.  It came down to the September event, in the semi-finals Karla and Mariah had to race.  Karla got the round win and then went onto win the event to clinch the championship.

“This year has had it challenges.  Last October I almost lost my husband Frank and then in May we lost Austin.  I thought about giving up, but I knew in my heart that Austin would’ve kicked my butt for thinking that way,” said a smiling Karla Eveland.  “This championship means so much to me after everything our family has been thru in the last year and wouldn’t have been possible without love and support of my husband Frank, the entire Eveland family (Bob, Misty, Austin, Dustin, Bri, Alivia, Holden, Shane and Sandy Weaver).  I also want to say thank you to McMillen Tires for their continued support of our racing.”

Karla plans on taking her husband’s advice and continue to race since she is still having fun doing it.