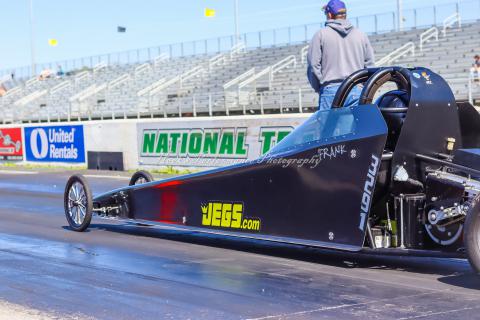 The JEGS.com Jr. Dragster Series features some of the best young racers in the Central Ohio area and this past year the Jr. Thunder class showcased some of that talent.  With the likes of Ava Dutton, Kyndal Wolfe, Riley Goodin and Frank Tanzillo chasing the 2021 points championship.  When all the points were calculated it was Frank Tanzillo taking home the championship.

During the offseason Frank was tabbed by Dave and Michael Ruark to pilot one of their JEGS electric cars during the 2021 season and Frank proved to them that was a great decision.  The season started out well for Frank as he was able to go some rounds at each race.  It didn’t take long though for Frank to park his car in the Winner’s Circle. On June 12, Frank faced off with his good friend and teammate Ava Dutton in the final round, with Frank taking the win.  After that win Frank went on a tear, with 2 semi-finals, 2 runner-ups and 1 win over the next 5 races.  Coming into the final points weekend Frank was sitting at the top of the sheet and he never let it slip, he won the Saturday race and went to the semis on Sunday.  Frank finished his championship season with 3 wins, 3 runner-ups and 4 semi-finals in 11 appearances.

“This year was a very different experience for me as I had a new car and a new crew chief helping me along the way.  It was really cool having Michael Ruark as my crew chief this season as I was able to learn a different style of racing.  I am very grateful that the Ruarks and JEGS trusted me to pilot their car in the points this year,” said a smiling Tanzillo. “I also want to thank my family crew as well for all their support, my Dad (Mark), my Mom (Hollie), my brothers Logan, Maddox and Karson and my sister Brook, Brett, Brad and Tony, Kaylee Phillips and the Dutton Racing Family and my co-crew chief Olivia Sheets.”

Next year Frank plans on racing in the Jr. Thunder class for one more year as he goes to defend his championship.