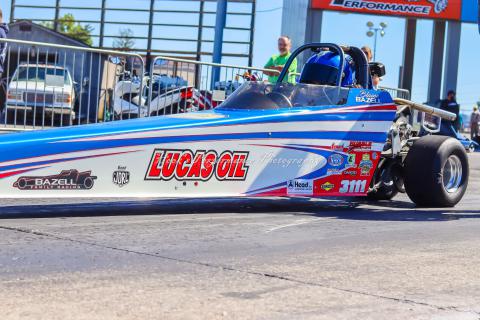 This season the Jr. Lightning class in the JEGS.com Jr. Dragster Series saw some of the best of the next generation of racers contend for the 2021 Championship.  The class saw a multitude of racers sitting at the top of the points sheet during the season, but it was Blaine Bazell who after all the points were tallied came away with the championship.

Blaine started the season strong with a decent outing the first race of the year posting a semi-final finish.  Over the next few races, he picked up a couple wins in the second chance class giving him the confidence in both his driving and the race car.  His season really took off at the end of August, Blaine came into the weekend sitting 4th in points.  He parked his car in the Winner’s Circle that Saturday, moving him up to the top of the points.  On Sunday he completed the sweep, putting a 64-point gap between himself and second place.   The final points weekend turned out to be a good one for Blaine, he was able to clinch the championship with his semi-final finish on the final day of the season.

“This year has been a lot of fun being able to run for points.  This championship means a lot to me because nothing ever comes easy.  My team and I have worked hard all season and never refused to give up. I am glad I was able to do my part in consistently going round and not cracking under any of the pressure,” said Blaine.  “I want to thank my team and family for everything they have done this year, my dad Brian, my mom Shawntel and my sister Sarah.  I also want to say thank you to all the great sponsors that helped this year, Lucas Oil Products, Sunoco Race Fuels, American Race Cars & Hubble Motorsports.”

Next year Blaine and his team plan on defending the Jr. Lightning championship and running some of the big money Jr. Dragster events.