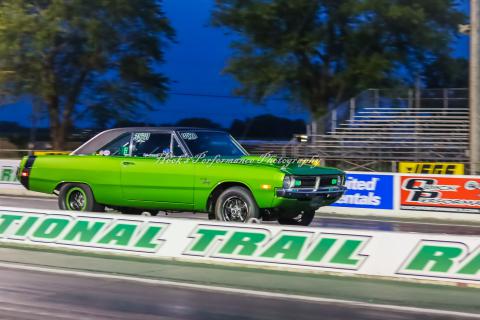 A new class, Bottom Bulb, was added to the JEGS Wednesday Night Series in 2021 and it was designed for any racer either footbraking or using a transbrake and no delay boxes allowed.   The first ever Bottom Bulb champions was won by Dylan Spring, a young man that has become one of the rising young racers here at National Trail Raceway.

Dylan was unable to make the first race of the JEGS Wednesday Night Series due to a work commitment, so his Bottom Bulb season didn’t start until the event on June 16 where he was able to get the win with his ’72 Dart Swinger.  The next event in July, Dylan took his car to the final round but couldn’t close the deal although he did leave the track with the points lead.  The next race in August, Spring was once again able to park his car in the winner’s circle and opened a commanding lead at the top of the points standings.  Unfortunately, the last race of the year didn’t go Dylan’s way as he was not able to make it out of 1st round.  But his competitors couldn’t win enough rounds to overtake him in the points clinching his first ever Bottom Bulb championship.

“This year was a lot of fun.  Being able to come out and win some races this summer and spend time with friends made it all worthwhile.  Racing is a family tradition for us so to be able to share this championship with my Dad, Mom and brother means the world to me,” said Spring.  “Winning a championship is not an easy task and being able to add this trophy to my collection is the reward for all the hard work this summer.”

Next year Spring is looking forward to racing more and turning on more win lights.